How to Woo a Widow 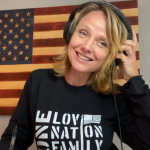 Made by a Military Spouse

Fate may have had its way with the Hamilton sisters, but their destinies are still up for grabs….Something has to be done about the Hamilton sisters. Faith and Claire Hamilton are so focused on avoiding their pain that they are forgetting how to truly live. Fortunately for them, feisty family friend Ollie knows a little something about what it’s like to cope with the death of a husband. She also knows how to mix a splash of fun into the process. Now, she is determined to impart the lessons she’s learned on the two young widows she loves like daughters. Her efforts start discreetly; Faith doesn’t even realize she is being nudged into the arms of the man she has been denying her attraction to, and Claire’s long-buried lust for life is reignited by a challenging new job. With Ollie’s touch, massive meltdowns are turned into hilarious moments and the weight of shameful secrets is unburdened. Neither sister has any idea Ollie is mentoring the men who have fallen for them in the fine art of widow-wooing, and no one can predict how her students or protégées will fare.

There are no reviews yet.

Questions and answers of the customers

There are no questions yet, be the first to ask something for this product.

Turn your passion into a business